It is official. Our love lives (or lack thereof?) are a joke, a game, an absolute sham. Everyone knows this. Tinder sure as hell knows this, every time you are ‘matched’ with a possible suitor you are asked if you want to talk or keep playing? Um what? “Do you think this is a game Tinder!?” It is, in all honesty, an absolute farce. Online dating that is. Not our lives geez. Aesthetically you judge and are judged based on a selection of photographs skillfully selected to capture the audience. Now I know that this isn’t a new thing nor does it really differentiate that much from real life ‘Tindering’ BUT man does it make for thrilling fun. Take me for example, last weekend in my usual sloth-like-post-break-up state I sat at home and binge netflix’d whilst making excuses to my friends that I simply could not go out – apologies gals. It was during this time of boredom that I discovered the world of online dating. Oh woah, what a bevy of people we’ve got on there….

Now this whole online dating situation is not new. Not by a long shot. Before technology took steroids and pretty much took over every facet of media there was print media. Now not too many people know about it, but once upon a time, there was a mode of information delivery called Newspapers. It was within these newspapers that such things as classifieds came about. Now not to get confused with ‘buy, swap, sell’ which is so avidly displayed throughout Facebook, it was a sort of, match-maker/partner finder. If you know the Pina Colada song, you know classifieds. Anyway, sidetracked, this worked! I know it worked because this is where my parents met all those years ago and they are pretty much the only skerrick of hope I have in love and lasting relationships.

Fast forward to dating now. Which then brings us to the millennial ‘f*ckbois’, friends with benefits, casual hook ups and then the ever-so casual ‘never hear from you again’. And of course, there is the phone app that EVERYONE and I mean everyone uses and the is Tinder. It’s like RSVP and Facebook had an orgy with iMessage and created a super app! It’s everywhere. I have overheard on numerous occasions conversations between people somewhere along the lines of “oh I saw you on Tinder”, “you on Tinder”, “God you should see the talent on Tinder”. It is almost as though it is a rite of passage into singleton. “Oh you’re single. You on Tinder yet?” Christ give a chick a chance to get out and buy a razor, some fake tan and learn how to use chicken fillets again before jumping head first into dating again would ya?

But as with anything that’s good, it has to have its downfalls. For example, I have this friend, let’s call him Ben*. Ben is one of the nicest, weirdest and most lovable people I have ever met. Like he is THAT good, cue Rachel and Ross’ promise in Friends – if they’re not married by 40, they’d marry each other. I’m pretty sure I haven’t had that circumstantial discussion with him, should probably call dibs soon-ish. Anywho, I have known him for nearly five years and during this time, he has had one serious relationship and she turned out to be a horrible person and they parted ways. Now needless to say that has brought him to online dating. I don’t know if he does it out of boredom, legitimate interest etc., but he is probably one of the very few decent blokes I know that is on there. I am not saying that guys on there are not of a high caliber or standard. I am just saying that the guys that I KNOW that are on there, are not. It’s because of the guys who send lewd comments or just like to pester and ‘troll’ chicks that men like Ben, have no chance.

I was having quite a laugh trying to come up with a witty yet sarcastic bio that perfectly described myself to the male population currently unbeknownst to mwah. I came up with the following:

Now all of these were at some stage right up there, at the top of my list however, they didn’t make the cut. I chose to go with a more natural bio –

They say ‘pictures speak a thousand words’, well oh my lord the words that were elicited from my pictures were like poetry. Some of the dribble that I was spun was so ridiculous I was actually googling nunneries in Brisbane and seeing if they had any openings. You’ve got the blokes who are just fishing for a multiple-night stand (eyeroll), you’ve got the ones who upload all of their modelling shots, Instagram bio’s and snapchats #fitspo #popular. Sometimes you’ve just got the downright creeps – older men lying about their age, married men looking for fun on the side, nymphos named Paul who are investment bankers by day but kinky son’zas at night. But then in this massive pool of men, you have the genuine guys who are there to fall in love, to find a girl and spend the rest of their lives with them. And it happens, I know it does. My sister is engaged to a guy and they’ve been together for three years and they met on Tinder. He is one of the most genuine and loving men I have ever met. My best friend is newly engaged (CONGRATS CHICKA!) to her man and they met on Tinder. He is also one of the best men I have ever met and is always there to give me a no bullsh!t response when needed and I completely appreciate that. But it’s the douches ^^ that wreck it for everyone else. Yes sure it’s funny to receive a) the most illiterate piece of trash ever written or b) the most cringworthy thing ever written but at the end of the day it isn’t anything substantial. It doesn’t equate to anything and the writer of said message; just looks like a twat.

If you have social media, any form of social media, please for the love of all things holy you need to look up Tinder Nightmares. This is what dating nightmares are made of. I’m talking catfishing, insults worse than ever, THE WORST ATTEMPT AT PICK UP LINES EVER etc. If you are happily in a relationship and content with the love bubble you reside in, please experience what Tinder nightmares is or even ask your single friends what their experiences are with dating. It’s definitely worth a giggle or two. 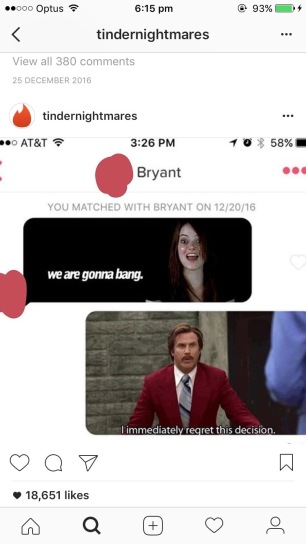 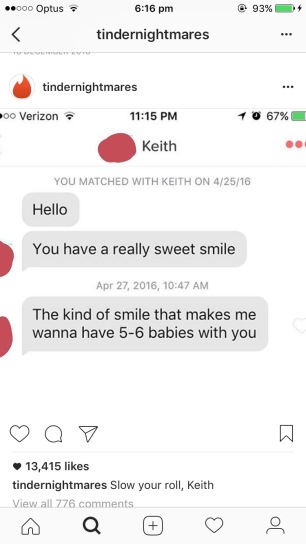 So you may be able to wade through the pool of online d!ck pic wielding gremlins or you may be content sipping on your peppermint tea and perusing pinterest – definitely doing the latter myself. All in all, do what makes you happy whether you’re two minutes, two weeks, two years or two decades single – don’t forget you do not need another person to feel complete or to love yourself. That’s your job.

So for now, the accounts deleted. The moustache-like lip wax is on and I’m tinting my ‘brows for no-one but myself. #singlelifegoals

Full-time social media content creator, user plus full-time exhausted. Everything that is relevant to a mid-twenties girl is discussed. Every view by me. Literally, everything as told by Erin. Punny right? everythingbyez@gmail.com for more info x View all posts by everythingbyerin